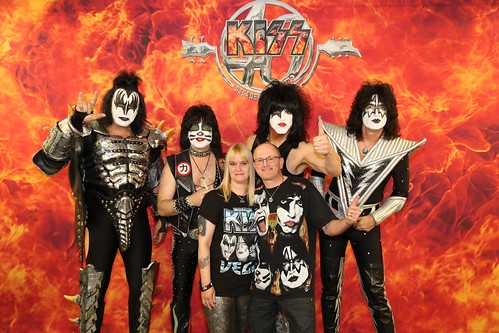 After a 5 hours drive by car we arrived at our hotel in Hamburg on june 2th. After we've checked in we went to the O2 Arena. Lucky enough there were not many fans in line waiting. Talked to fans as we were waiting untill the doors went open and as soon they did we took a sprint to the stage and...yes we did it again, front row on Gene's side!

Around 9:15 PM it was time for our band KISS and as 2 days before @ Rock Im Revier we enjoyed every minute of it.
This time the whole stage was set up and indeed it was the same as we saw in Las Vegas last year, a great stage with big screens on, behind and on the top, great light show and of course many bombs and pyro's, we could feel the heat of them were we stood!
The band played tight and sounded great! They played the same set as Rock Im Revier but it didn't matter to us, we cann't get enough, lol. Still got chills when Gene gives us his demon look! The arena was almost sold out and the vibe was good. KISS played for 100 minutes and before we knew it, show #2 was over. After the show we got a drink with some fellow Dutch fans and had a great time.

Next up was Berlin, we arrived at our hotel around 2 PM, checked in and relaxed a bit, enough time for a relax diner and sightseeing. We had time because it was a special day for us! We celebrated our 5th Wedding Anniversary with a Meet & Greet with KISS! What can we say about it? It's always awesome to meet the band and we had blast doing it and are so happy with our photo's!!! 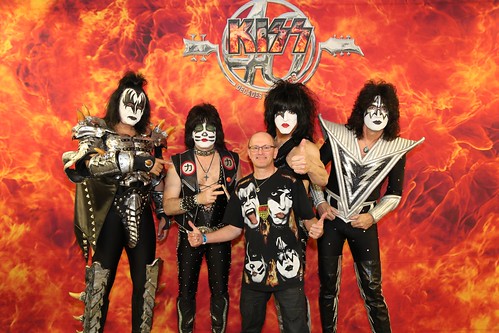 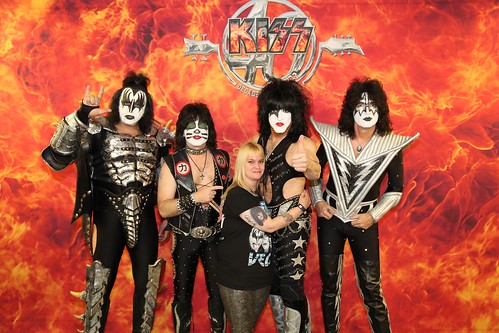 When we got back in the venue we decided to take a spot @ the small stage, were Paul will come over during Love Gun. A moment later we saw Shannon walking by and she had a place on the special stage right in front of us. We waved to her and she said hello to us. Before we knew it, it was time for KISS to hit the stage.
With a spot from the middle of the field, we had a different view on the stage we don't see often, lol. Now we could see how the stage and light show looks from here and we must say, it looked awesome and we enjoyed the show even from this spot! Gene didn't fly during God Of Thunder because of technical problems, but Paul flew to us at the small stage during Love Gun and we had a great view at him!
Again the show was great and we had a good time! Here's a video of Parasite...


Next up, show #4, Leipzig. When we arrived at the arena we saw that there were 2 entries, a west and east entry. Which would we choose? We went for the east entry and it was the right choice because fewer people were waiting there. This arena was smaller that the O2's and we hoped for a good spot. Lucky enough we did, front row @ Tommy's side! We saw Doc walking by a few times and Danny aswell who welcomed us to the show.

Before we knew it, much earlier as we expected, @ 8:45 PM it was party time again! And from the start to end there was a awesome vibe, this was the best show we saw so far! Everyone was jumping, singing along with each song, incredible to be there!
We had a blast and loved every minute of it, especially when Paul came over and was right in front of us! He recognized us and pointed to us, this was such a special moment that we'll never forget!
This was the setlist for all 3 shows:
Detroit Rock City, Deuce, Psycho Circus, Creatures of the Night, I Love It Loud, War Machine (Gene spits fire) Do You Love Me, Hell or Hallelujah, Calling Dr. Love, Lick It Up, (Bass Solo, Gene spits blood and flies) God of Thunder, Parasite, Love Gun, Black Diamond. Encore: Shout It Out Loud, I Was Made for Lovin' You & Rock and Roll All Nite.
We had a incredible time at the shows and are in such a KISS mode that we would go to more shows if we could. Can we wait 2 more weeks to see them in Amsterdam again? We have too!
Next up: Ace Frehley in Amsterdam!
Here's a selection of photo's from the 3 shows, enjoy...

You guys are so fortunate to be able to indulge in your passion for KISS to the degree that you do, so jealous.

Another show added. You guys are so fortunate to be able to indulge in your passion for KISS! Wished I could.

2 months to go till we see Kiss again in Germany!

and Ace in Zoetermeer

Great pics of you meeting Kiss, fantastic! I imagine you both had a great time with all those Kiss shows in Europe, a copple of months till I see them in Australia!

I've loved reading your review, fantastic meet and greet photo of you and the band, love it. Enjoyed your live pics too!