Our Roadtrip To See The Gene Simmons Band Live! 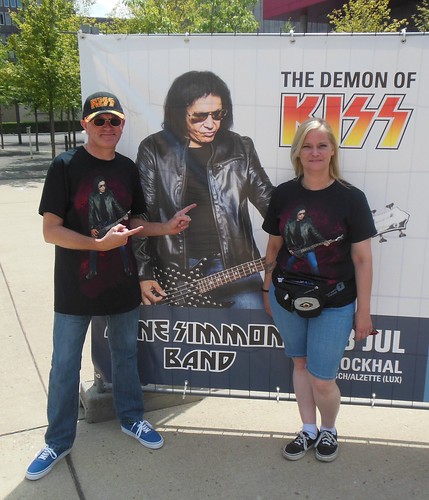 Our roadtrip to see the Gene Simmons Band during their European tour began on july 18th when we arrived in Esh-Alzette (Luxembourgh) around 12 PM @ the Rockhal. We were one of the first fans who were there at this time. The first thing we saw were the big banner promoting Gene's show and we took some photo's with it. After we have check-in to our hotel and got something to eat we went back to the venue and waited untill the doors went open. In meantime we talked with other fans and had a good time.

Around 6:30 PM de doors went open, the venue had several doors, but only 1 went open and we were lucky to stood right for that one. So, as soon we passed the secrurity we run to the stage and got a spot right in front of Gene on front row, so happy with this spot! We only have to wait untill the Demon would take the stage and around 9:10 PM the show started with the intro of Radio Active and Gene walked on the stage under a huge applause from the fans. Deuce followed and the place went nuts. After Shout It Out Loud Gene wanted his bassguitar louder, much louder. And from that moment it was louder, looked like the walls thrilled from the sound of his bass, go Gene!
Next up was Are Your Ready a song from his Vault and man what is this a cool song and awesome to hear this for the first time live, it kicked ass! Here's our video:

Despite the heat in the venue Gene had such a fun on stage and his band was great! He sweat a lot and wiped his face with a black towel more than once. Lucky enough we managed to get his towel and has now a special place in our KISS collection! 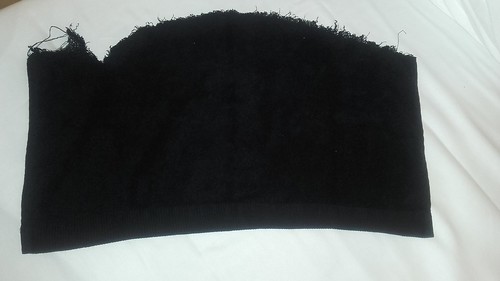 They played some cool songs like All The Way, Long Tall Sally or one of our favorites Charisma, Here's our video:

Before we knew it the show was over, much to soon for us, he could have go on for hours. Such a awesome experience to finally see Gene doing a solo show and we had a blast! We returned with abig smile on our faces to our hotel.

After breakfast we left our hotel and drove to the next city to see show # 2 of the Gene Simmons Band in Tilburg (Netherlands) on july 19th. We arrived around 2 PM at the 013 Poppodium and after we've parked our car we went straight to the doors and to our suprise no fans were there (yet). I went to the boxoffice to pick up my reserved GSB poster! After some time more fans arrived and we had a great time talking to them. Around 6 PM some people from the venue told us that we had to make some room because they had to place some fences around the entrance, couldn't they've placed them way earlier and not 1 hour before the doors will open?
At 7 PM the doors went open and ones again we rushed to the stage to get a good spot and we did, front row for Gene!

At 9 PM we hear the intro and we knew it's time to have a rock & roll party. The show started with Deuce and the crowd was into the show from that moment on. Are You Ready get's better and better each time we hear it live! This time they played Radio Active and here's our video:

Gene said we can play anything we want, what do you want to hear? Okay here's She's So European and the fans loved it. We also saw Shannon & Sophie watching the show left from the stage and when Gene asked that the fans would sing with him on Do You Love Me he invited Sophie on stage to let her sing the chorus and she did a great job, she has a great voice! Suddenly she recogniced us and waved to us, such a cool moment!
The setlist was almost the same as in Luxembourgh but with a few suprises like I Was Made For Lovin' You & Domino. We had a great time again and Gene sounds awesome live and enjoyed his show as much we do! It was time to drive home, get some rest and get ready for his next show.

Next day we got up early and drove to Oberhausen (Germany)on july 20th to see show # 3 of the Gene Simmons Band. We arrived on this hot friday around 12 PM at the Turbinenhalle, only a few fans were waiting. So we do what we always do, talking to other fans about KISS and what's going on with their bandmembers. Slowly after time went by, more and more fans showed up and around 5:30 PM the doors went open. Our only goal was straight to the stage to get a good spot. But once inside the venue there were another 2 doors you've to go in before you got to the stage, but these were not open yet, because the soundcheck wasn't done? So, we have to wait again? Why not open doors if everything is ready? So, this time maybe a good spot wasn't in for us... Finally the other doors went open and we run like hell to the stage and lucky enough we got front row, right in front of Gene! So, now we've to wait and have to go through 3 support bands (because it was a kind of festival) untill it was time for the GSB. It was so hot inside the venue that people fainted and than security started to handing out bottles of water.

We think it was close to 10 PM when the intro of Radio Active began and when we heard it all the heat and tiredness of waiting disappeared and got ready for Gene. As soon he walked on the stage we had a great time and we think this was the best show we saw. Gene was joking all the time and asked fans what they wanted to hear, so here's Unholy!
One of the things he does, if fans don't pay attention to his show by talking or looking on their cellphones, is to confront them. Asking them what the hell they're doing here, why they don't pay attention to him, I'm Gene Simmons, I'm in KISS. He even stopped the show for this, lol. We also don't understand why people are talking or are on social media during a show.
But go on with the show, tonight we got a lot of more songs than on the 2 previous shows, like Watching You, Goin' Blind or what about Love Theme from KISS! Here's our video:

The fans had such a great time and responded with a lot of cheers and singing along to these songs, that Gene played some more gems, like Warmachine & Ladies Room and we had a blast! As we said before this show in Oberhausen was the best show out of 3, with 23 songs!
But everything has to come to a end, we saw 3 awesome shows and Gene was in top shape. We're happy that we had the chance to see Gene perform solo and we hope he will return to Europe to do some more shows in the future.
Here's a selection of our photo's from these 3 shows...

*(c) 2018. All personal photo’s/slideshows/filmed footage may only be used by others if is reference/linked to this site or me and ask me first!

Let's see if he comes to the UK

Thanks for your review of the shows, awesome that you had his towel!

Ik was ook in Tilburg en de show was geweldig