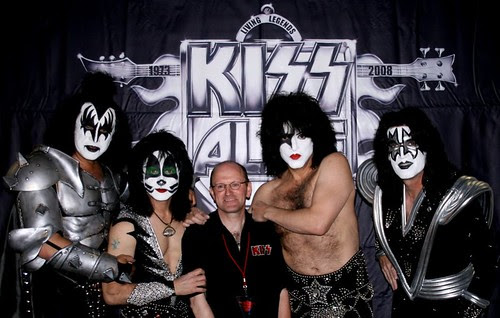 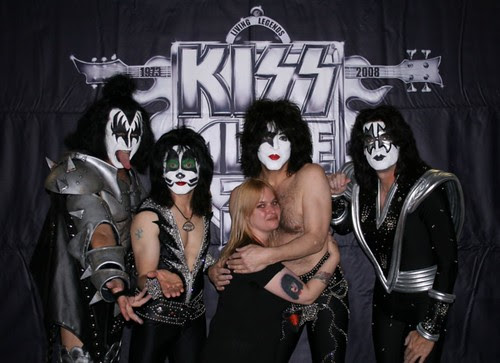 Why? This day have changed our lives forever!

Finally we could see a KISS show again, my first one since my last one 7 years ago in Australia! But this kick off show of the Euro tour in Oberhausen (Germany) wasn’t the only reason why this date will allways be special for me…

We also had a meet & greet with Gene, Paul, Eric & Tommy that day!

After a 90 minutes car drive I arrived, together with my brother in a sunny and hot Oberhausen. Checked out the venue and than waited for Marina to arrive, she also did the M&G. We went to the expo to look for KISS stuff ect. Spend a little time there and around 3 pm we were back at the Arena to get our laminate, T-shirt and instructions for the M&G. A very friendly Dean Snowden told me everything I wanted to know and that we had to be back in the venue at 7:30 pm, with our stuff we would like to have signed. So we went to a place to meet friends and with some cool drinks and something to eat (however because of the nerves we almost couldn’t eat) talked to other fans and enjoyed those hrs till it was time for the M&G.

2 days earlier I received a email with the latest M&G details, stated that you could bring guitars in for signing. So I decided to take 1 of my Paul Washburn Guitars with me, along with some records and photo’s. Finally it was time, nerves kicked in now really bad (lol) and together with Marina we got into the venue to the meeting point. With us there were around 20 fans there for the M&G (more than I thought) and at 8 pm we got backstage, to a room, with on the walls the Alive/35 logo and banners with the KISSology DVD’s (this was the same room where the pressconference was on thursday) We got the last instructions from Dean and a copple of minutes later the door went open and with a loud of cheering by us fans, they enter the room…Gene, Paul, Eric & Tommy!!! 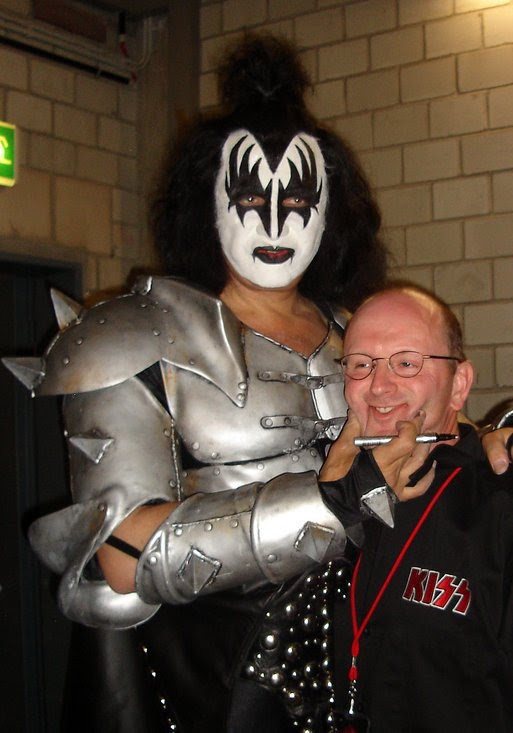 The guys were very kind and thanked us al for coming, first it was time to take the photo with the band. A suprise to us all was that we could also use our own camera to make photo’s!!! When it was my time for the pic I give all the guys a hand and Gene said how are you doing and Paul said something like great to see you, Tommy said welcome and Eric said something too but I cann’t remember what, lol. Time to take my 2 pics with the band and when I saw how my 2 pics have turned out, I couldn’t be more hapier, they’re incredible!

After the photoshoot was over, the guys started to mingle around the fans, so it was time to got my items signed. Paul signed my guitar right away, also his solo picture disc and a photo with me and his self-portrait print. And when he saw that photo, he said that’s really cool! Than Eric & Tommy signed my Rock The Nation DVD and they’re both were very friendly and Tommy is just a great guy, no bad worth about him from me! Last one was Gene and he signed his solo picture disc, Asshole CD and a Family Jewels photo.

The meet & greet was going to its end and the guys got ready to get out of the room very slowly, Paul was the first leaving, with a little later Eric and than Tommy. Gene was still in the room and I was lucky enough to got a photo with him alone, my favorite member! Gene was great and stayed the longest in the room, no arrogance at all.

After the guys where gone (snif) we all got our programm (with a extra photo inside) and to our suprise it was signed by the whole band! And than it was over, it was something special I’ll never forget, it was great to meet the guys in a relax situation, everyone took their time for me and I’m glad I could meet them…

Here is some short footage of my Meet & Greet and Marina’s with KISS…
(Note: my photoshoot took longer, this footage shows only a copple of seconds of it!)

Read more about our Meet & Greet and the show here including many photo's...

*(c) 2008. All personal photo’s/slideshows/filmed footage may only be used by others if is reference/linked to this site or me and ask me first!