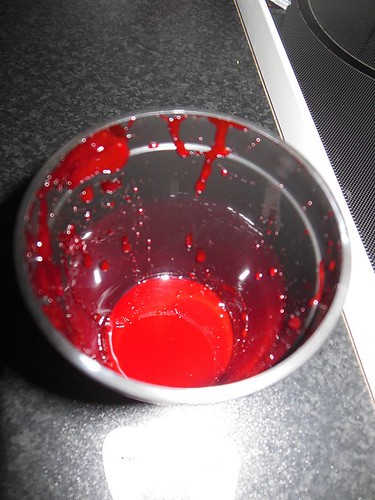 We arrived @ the Veltins Arena in Gelsenkirchen around 2 PM for the Rock Im Revier festival, with KISS as headliner.
And...we did it again, front row at Gene's side!
What we could see of the stage is that there wasn't no spider, but a part of the Las Vegas stage. We had a few hours to kill, but around 9:15 PM it was time for the Hottest Band In The World!
From the start of the show it was party time again for us! They started with Detroit Rock City and all the classics were played. Gene aswell Paul said "hello Dusseldorf", but we're in Gelsenkirchen, lol.
During Hell Or Hellalujah there was kind of a new thing, a kind of drumsolo followed by the solo from Parasite!
Gene spit fire during Warmachine and did his bloody bass solo. I managed to get Gene's Blood Cup and was so happy to finally got this! This will be a eye catcher in our collection!
Gene did flew during God Of Thunder but Paul didn't fly during Love Gun. Tommy did his guitarsolo with firework, but shortened. But it didn't matter to us because we had a great time and we'll see their whole show during the upcoming shows we'll attend.
KISS played over 90 minutes, but's that's normal for a festival. But our hunger is not stilled and we're looking forward to the other 5 shows the upcoming weeks!
This was the setlist: Detroit Rock City, Deuce, Psycho Circus, Creatures of the Night, I Love It Loud, War Machine (Gene spits fire) Do You Love Me, Hell or Hallelujah, Calling Dr. Love, Lick It Up, (Bass Solo, Gene spits blood and flies) God of Thunder, Parasite, Love Gun, Black Diamond. Encore: Shout It Out Loud, I Was Made for Lovin' You & Rock and Roll All Nite
Here's a selection of the many photo's we took, enjoy...

*(c) 2015. All personal photo’s/slideshows/filmed footage may only be used by others if is reference/linked to this site or me and ask me first!
Geplaatst door Rockhead op 3:27 PM

So jealous that you got Gene's cup, man I want that for years! It's not easy to get it these days.

Getting ready for our trip to the O2 world arena in Hamburg.