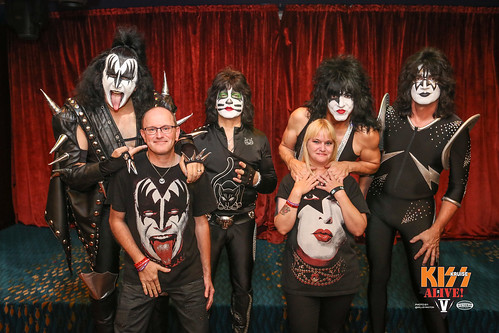 When we arrived in Miami on october 28th, have checked in at our hotel we went to the pre-party at the Hard Rock Cafe. We had a great time there with meeting Ken Kelly & J.R. Smalling!
The next day it was time for our KISS Kruise V pre-party on the Pearl and it was great to see a lot of familiar faces again. We feel like we are home, lol. After catching up with our KISS family we had to look out for the special KKV pre-party cup and lucky enough we got them!
KISS was already on board too, 1 day earlier than expected!
Later that day we checked out The Big Rock Show followed by a visit at the merchandise store. We got some T-Shirts, Hoodie, Bandana, Guitarpicks, Canholder & a Bag, there where a lot of items for sale.
After a visit at the restaurant we went to the Steel Panter show, it was a funny show but one time was enough for us.

The next day we stood op early, had breakfast and went to the pooldeck and saw that some friends where already standing front row. At first we had said to eachother we don't do that again, waiting for hours for the show, but when we saw that we now had the chance to get right in front of Gene we got the chills to go for it once again. So we did! Also there wasn't anything else happening that day untill the KISS show.
After the welcome toast it was time for our captians to took over the ship and around 4:30 PM it was time for the first unmasked electric sail away show ever! Also this show was my 50th KISS show and my lovely wife's 30th show!!!
KISS started the show with Flaming Youth (a track we haven't heard live before) and the crowd went nuts, this is what we want to hear, some deep cuts!
Here's our video of Flaming Youth:

The band was in a great mood en joked a lot during the show. KISS played some more rare tunes, like Mr. Speed and Strange Ways!
Here's our video of Strange Ways:


After the show we had to make sure that we got the Tommy Thayer Cup and we were lucky enough to get 1 of the last 8 cups that were over!
At 8 PM we saw Lita Ford live and her show we both wanted to see for sure. She was great and we loved the show, she played all her classics! Later that evening we also saw The Dead Daisies show and they rocked the place, we already saw them live during the European KISS 40th Anniversary Tour last june.

On saturday morning we had our KISS Photo Booth session where we had the chance to get photo's together with stage played KISS gear! The photo's behind the drums look so cool! 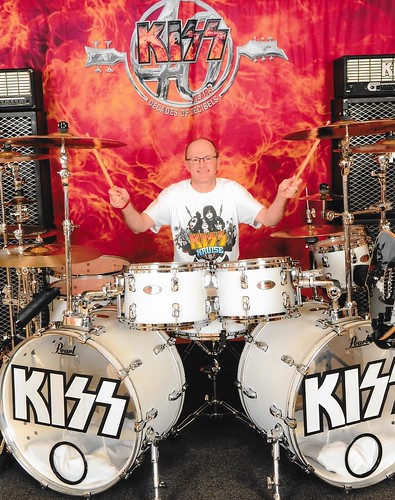 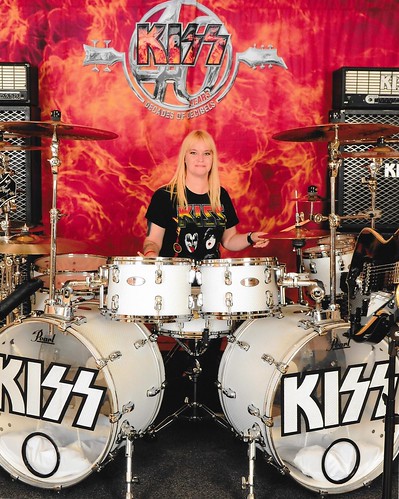 At 2 PM it was time for name that tune with Tommy Thayer were Tommy plays the guitarsolo of a KISS song and you had to guess what KISS song it is. We thought it was great to hear those guitarsolo's.
Here a 2 examples:


After Tommy I went to Doc McGee's Q&A and as always he has some great stories to tell, right after the Q&A was done I joined my wife at The Dead Daisies show, again they were great. When their show was done they did a signing session near the stage, we bought their album earlier this day, so we had a signed CD now!
Yes, we managed to get the Paul Stanley Cup today, lol.
So it was time to get something to eat now and get ready for our KISS indoor show at the Stardust Theater. When we arrived in the venue there were curtains for the stage, so we only could guess how it would look like. A little after 9 PM it was time and the curtains went open and KISS came on stage! Man, it looked like we traveled back in time, to 1975! Their stage looked almost exactly as in 1975 and their costumes aswell! Their stage apperance, looks & moves looked as we were watching a Alive show in 1975! KISS made sure that they did their home work!
KISS would play their entire Alive! album from beginning to end and started of course with Deuce and we were thinking, it's like we are in 1975 right now. This is what makes the KISS Kruise so special, a one of a kind experience, we'll never see again as like the Dressed To Kill Kruise from last year!
Here's our video of Firehouse:

We had a great spot at the show and we had a blast and before we knew it was over.
This was the setlist: Deuce, Strutter, Got to Choose, Hotter Than Hell, Firehouse, Nothin' to Lose, C'mon and Love Me, Parasite, She, Watchin' You, 100,000 Years, Black Diamond, Rock Bottom, Cold Gin, Rock and Roll All Nite & Let Me Go, Rock 'N' Roll. Encore: I Stole Your Love & Ladies Room.


We were hungry after this show because off all jumping around all the time. Later that night we did meet Tommy Thayer and thanked him for this great Alive show! 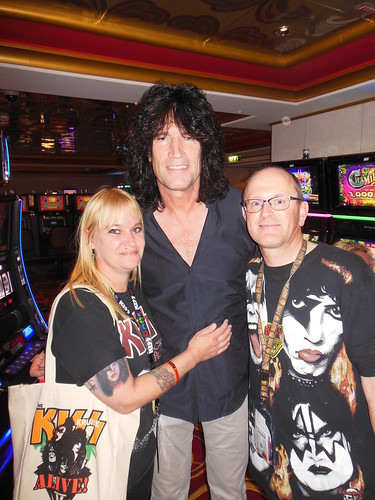 Sunday was a little bit relax day for us when we docked in Ocho Rios Jamaica, we spend some time there and enjoyed some free time. Of course we had our Eric Singer Cup for this day! We had our Meet & Greet Photo with the band at 7:30 PM and as always we are still nervous to meet Gene, Eric, Paul & Tommy! The time we spend with them was special for us and all we could hope that our photo would turned up great. When we saw our photo later all we could think, man this photo looks awesome, especially this time Gene sticks out his tongue, awesome pic!!!
At 9 PM indoor show #2 began and we watch it for a hour on the big screen and than went to the pooldeck to see Lita Ford's show for the second time, but this time front row! Again a great performance by her. We closed the night watching The Big Rock Show.

On monday we had a full day for us with all the events that took place that day. First we went to the KISS Swap, than headed over to the Sixthman Q&A and got the news that there'll be a KISS Kruise VI next year from Miami! So this was good news for us and we hope we'll be kruisin' with KISS again next year. Also we heard rumors about a European tour in 2016 with dates in Germany, yes one more chance to see them!
After all this news it was time for the pizza party with Paul Stanley were he teaches us how to make pizza, lol.
Here's our video (a copple of minutes):

It was funny to see him gave a pizza class.
As soon it was over we headed over to the meet & greet with Lita Ford and we had a great photo's with her, she's such a nice person. During the Kruise we've meet members of The Dead Daisies as John Corabi, Marco Mendoza, Brain Tichy, Richard Fortus aswell Doc McGee, Francis & Red!
When we came back from our cabin we saw KISS leaving the elevator for their Q&A.
Here's our video:

The KISS Q&A was very funny, they pull jokes on eachother and we had a great time! Right after the Q&A it was time for the Belly Flop with the Simmons family. Great to see them laugh about the jumps in the pool and gave the contesters numbers for it. When it was done it was time for us to get the last cup, the Gene Simmons Cup to make or set complete. and we managed to do so!
The last band member activity was Eric Singer's Allmost Famous were he announced the 4 bands who won the battle earlier. So we had a full day to see all these events and had not the chance to eat, so we headed over to the restaurant to get some of Paul Stanley's Pizza!
Here's a photo-slide show of all the bandmember activities:


During our stay in the restaurant we also meet Eric Singer! 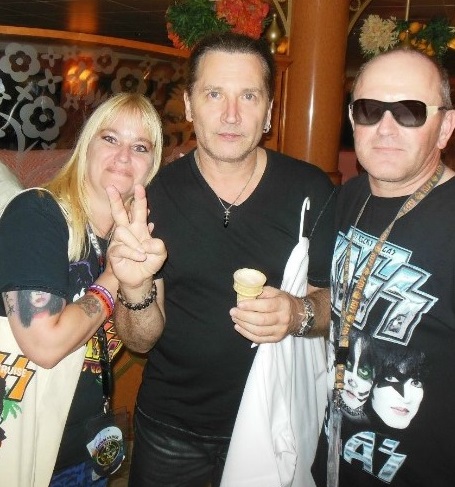 On our last night on the Pearl after watching the last few songs from The Big Rock Show, we saw The Dead Daisies for their third show in the Atrium, front row and saw a great show again, expecially the drumsolo of Brain Tichy during their KISS cover of Parasite, he played it exactly, complete with Paul's raps, as we all know it, so cool!
Later that night we meet the members of the band aswell Doc, Red & Francis and so came our 4th mission as Commanders to the end on the KISS Kruise V!
Here's our recap of our KISS Kruise V Experience:
We had such a awesome time again and this was our 4th KISS Kruise and every Kruise we did was special, we have no favorite, all 4 they kicked ass!
Here's a recap of the KISS Kruise V, we're in this video!

Yes me booked too. This will be number 4.

We booked yesterday and wilbe our 3th kruise, cann't wait till it's october!

I'll book tomorrow, will be my first Kiss kruise, I hope some cheap cabins are still there!

Great addition to the line-up with Lita Ford and Steel Panther, let's hope for more good bands on KKV!

Hey that KKV cup looks great, we'll score that for sure!

I'm booked for the photobooth too, let's see what's in it? Any guess Rockhead?

Just a copple of days to go before we hit of to Miami! See you there!

See you in a few days.

Have a safe trip. See you on Wednesday.

I've enjoyed reading your report and watchin' the vids, love all the pictures!

I loved your report!!!

Always like your reports about the shows and cruises you are going too. Looks like you had a great time at the kruise, great bandphoto aswell as the the ones with Tommy and Eric! Great photo with Lita Ford too, never met her, I hope to one day.

Awesome band photo with you guys, love it!

We had a awesome time to on KKV, will be back next year for sure!