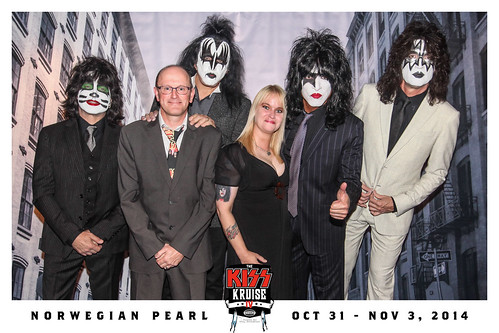 This was the setlist: Comin Home, Plaster Caster, Got To Choose, God Of Thunder, Hide Your Heart, Christine Sixteen, Nothin To Lose, Love Her All I Can, See You Tonite, Hard Luck Woman, All The way, Shock Me, Hotter Than Hell, Firehouse, C´mon And Love Me, Cold Gin & Do You Love Me.
After diner it was time for the KISS Q&A and we had almost the same spot on the pooldeck as with the unplugged show. Amoung the questions that have been asked to the band, was what the fans could expect at the Las Vegas shows? A brand new stage, specialy designed for the Joint. Also they announced a European tour in 2015!
Later we checked out some other bands out, 1 of them was the Pat Travisband and suddenly Eric & Tommy came on stage and played some songs with them, later also Paul's son Evan played with them and Paul was in the audience and watch it all.
Later that evening we've meet Evan and he was very cool to us and it was no problem to take photo's with him.


The next day we got up early to get our Paul cabo wabo cup, we already had the ones from Eric & Tommy, these are going fast and on 11 am they hadn't any left. Tomorrow we've to be sure to get our Gene one too, to complete our set.
Also we had a stop in Nassau (Bahama's) we got of the ship and went to visit this town. Not so great as Key West.
Today it was also for us to see KISS live again for the second time! The first indoor show at the Stardust. We went early to get a good spot, left standing area, at Gene's site.
Around 9 pm it was time...KISS came on stage, in their Dressed To Kill suites! A huge applause was to hear from all the fans! Man...this looks so awesome, we knew we'll never see this again! This was so unique, one of a kind experience, this was KISStory in the making and we were there!
They started with Creatures Of The Night and the whole place went nuts!

The Doc Mc.Gee Q&A was up next and he also confirmed there'll be a European tour next year and that the Las Vegas shows will be taped. About KISSology IV...next year. Doc also asked us what be thought about the setlist, fans make sure that they didn't liked it and wanted more rare songs! He said he would pass this to the band.
After the Q&A it was time for us to get ready for our KISS photo shoot. Because it's Dressed To Kill theme we decided to go in style! Around 7 pm our photo with the band got taken and we were so curious how the photo would look. But we could not hope for a better result, the photo looks so awesome to us, because we weared the same as on our wedding day, it's our "second wedding photo"!
Next up was KISS indoor show 2, we watched it on a big screen in the Atrium. They played some other songs than the first night, such as Parasite. When the show was over we stayed there to see the Big Rock Show and this performance finished this day.