We've Been Kruisin' With KISS Again!!! 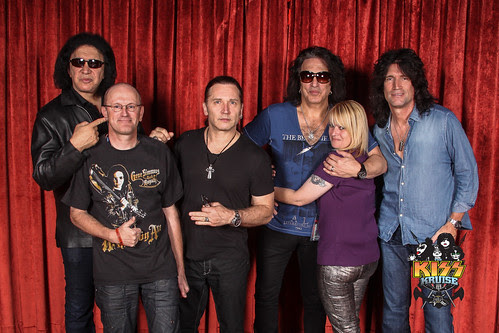 On october 26th we arrived in a warm Miami, after we checked-in in our hotel we went to the Living In Sin 2 party in the lobby. We we're welcomed by old friends and made some new friends. Lydia Criss was the special guest for this evening, we took a photo with her and let her signed our photo from 2009! Also in a raffle I won a great Phantom Of The Park magazine that was signed by Peter Criss one day before!
Next day we went to the second pre-party @ Will Call we're we saw Bob Kulick doing the soundcheck, later we meet him andKen Sharp, took some photo's with them and enjoyed the party. Suddenly I saw Sophie Simmons arriving, we went over to meet her, she was very nice to us and we went together on a photo with Sophie!
After dinner it was time for or last pre-party at the Hard Rock Cafe. Special guest was Bruce Kulick and we did a meet & greet with him, as usuall he was very nice and even knows us by name! It was a great experience meeting Bruce in the US. Also we meet Maria Contessa and later that evening we saw Bruce playing with Priss. It was such a long time for us to see him playing live. We had such a great time at all these parties, meeting a lot of great people and looking forward to the KISS Kruise the next day!


On monday it was time were we came for, our second KISS Kruise! We came on board around 11:30 AM, after we settled in in our cabin, we waited for KISS to come on board. First Paul and his family came on board, followed by Tommy & Amber, Eric and Gene & Shannon. We saw it all!


At 6 PM it was time for the sail away show, we had a better spot than on the KISS Kruise II! KISS played some very cool tunes, like Let Me Know, Rock Bottom, Creatures Of The Night or Everytime I Look At You! The band enjoyed their time on stage and joked a lot, especially about Gene's shirt. We caught some guitarpics and we had a blast!

Later that evening we meet Evan (son of Paul) at the Vintage Trouble show and took some photo's with him.
The next day we visit Key West, a nice town with old architected buildings. We bought some KISS items there and when we came back at the Norwegain Pearl it was time for us to do the Wedding Vows Renewals. It was such as great as last year.
Later that night we watch the first KISS indoor show at the big screen in the atrium.

On wednesday there where many KISS events going on, first we went to the Gene Simmons Guitarpick Contest, Always great to see him, we went over to see the Drum Off with Eric Singer, followed by the Belly Flop Contest hosted by Paul Stanley! It was cool to see these events.
At 5 PM it was time for the Q&A with Doc Mc.Gee, we had a spot front row. Doc told us that there'll be a European tour in april/may next year! During the Q&A some fans were joking around with signs behind Doc, Evan included. The signs read; Doc will you marry me or Doc I want your baby, lol very funny!

Later that evening it was time for our indoor show and we couldn't wait to see the show!
KISS rocked the boat with a awesome show and some rare tunes, like Almost Human, Ladies In Waiting & The Oath!
The band played great and we had the time of our lives. They played near 2 hrs.
Set list: Love Her All I Can, Ladies In Waiting, Shout It Out Loud, Anything For My Baby, Do You Love Me, Almost Human, Hell Or Hallelujah, War Machine, The Oath, Say Yeah, Hide Your Heart, Mainline, Lick It Up, Let Me Know, Black Diamond, Detroit Rock City & Rock And Roll All Nite.


On thursday it was time for us to get our photo with the band! This time we choosed for a unmasked photo!
When we're waiting for our KISS band photo we saw them walking in right in front of us!

Our photo with the band turned out awesome, as you can see in part 1. We think it was a one of a kind opertunity to get a photo like this with all members unmasked!
After the photo shoot was over we waited and caught Tommy and Dean leaving.

When we walked to the elevator we saw Shannon & Sophie walking to us, we got a guitarpick from Shannon and took a photo with her and some fans!
It was time for some relaxing and some dinner. Upcoming was the Q&A with KISS and we decided to go over the pool deck to get a good spot, front row! We had to wait for 2 hrs, but it was worth it!
During the Q&A the band told us that there'll be a KISS Kruise IV next year! Paul joked a lot and said often; you can read it in my book. Funny was also when a little girl asked Gene if he ever got in trouble when sticking out his tongue, his repond (to say it properly) yes I did, lol.

Later that night it was time for the Halloween Costume Contest hosted by Tommy Thayer! We saw some great costumes and creations. Amber also watched the contest.
Again we were lucky enough to watched it all front row and had a good time!

Later that night we saw Night Ranger & Leo Gun and it got very late.
Next morning, after breakfast, the Kruise was coming to his end for all of us fans. What can we say about our second KISS Kruise?
Was it better than last year? YES! Why? Because we had more encounters with the band and their family!
We had some good places or even better places! We've a awesome unmasked band photo!
And it's also great to meet a lot of nice people from all over the world in 1 place.
Will we be on KISS Kruise IV? We hope so...

*(c) 2013. All personal photo’s/slideshows/filmed footage may only be used by others if is reference/linked to this site or me and ask me first!

Will see you there!!!

We've booked last week and lloking forward to meet you there!

Would love to go this time, but with only cabins open from $ 1000 or more, it's not possible for me.

hi how are you. i dont know if you remember me i came up to you and said hello to you on the kiss kruise 2.are you going to kiss kruise 3. i live in glasgow scotland.all the best brian.

So only 10 days to go when we meet again!

Cann't wait to meet you both on the kruise, we'll have a great time there!

I love your report and you've some great video's from this Kruise! Awesome pics also!

Great video's and photo's, rock on!

Thank you for sharing your story with us, your pics and video, is kinda we were there too,lol

Thanks Carol for your reportage!!!! You let us feel as if we were there!!!! THX and exellent job!!!!