My Interview With Bill Aucoin! 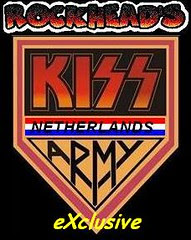 On saturday june 3th I went to the KISS Expo in Harelbeke, Belgium. That day it was exactly 30 years ago that KISS played for the first time in Belgium. I was lucky to had a interview with ex-KISS manager Bill Aucoin, who was special guest on that expo.
Backstage at the expo I met with Bill and my first question I asked him was:

Carol: So, what are you doing today for a living, any special projects?

Bill: I’m still working as a manager for 2 Britisch rock bands. One is called "Nothing Rimes With Orange" and the other one is "Cromsbreed"…They’re very promising for the future and I’m trying to get them a record deal…Also I’m raising money for independent movies…

Carol: What do you think about these KISS-expo’s?

Carol: Talking about stories, would you ever write a book about KISS?

Carol: I think you’re full of stories and it would be a great book, like the one from Sean Delaney "Hellbox"? .

Bill: Sean was a great guy…Did you ever met him (I told Bill that I met Sean at the expo a few months before he passed away-Carol) So you know that he had some good stories to tell…It’s sad that he died

Carol: How are you coming at the ideas for the great KISS live show?

Bill: I always thought KISS had to be big…Back in those days everyone was against us, critics ect. Everybody works agianst us, so I believed in the band…So I had all kind of ideas for the show and when I had something I went to the guys and told them about my idea…At one point I had the idea that one of them should be firebreating…But when I told them this idea, no one would willing to do it…and than suddenly Gene whould give it a try…It was always Gene who would try something, the other ones wouldn’t do it. At one point I had the idea to let Paul flying to the platform about the stage, because Gene had the fire & blood thing, I really wanted to invent something for Paul…But when I told him my idea, Paul wouldn’t do it, so there was Gene again and he would give it a try.

Carol: How comes that Paul had a "new" costume in 1980 and the other members not?

Carol: You was also the driving force behind the merchandise, why?

Bill: I always thought there could be more than just music with KISS…Hey The Beatles did it so KISS could top them. So at first there were only T-shirts…So why not dolls, lunchboxes…I had all kind of ideas and was their merchandise company.

Carol: Yeah I love the merchandise (I showed Bill some pics from my collection)

Bill: So you’ve a Paul print? I didn’t know they are for sale…I love it…As I said before, Paul is a creative person and I like his paintings very much.

Carol: What do you think of all the merchandise today?

Bill: It’s a little bit over the top now, but it’s all business…There are some great items out there now, but also some aren’t. But hey that’s what Gene & Paul want to do.

Carol: Gene & Paul? I always thought that the merchandise is more Gene’s work?

Carol: Sean Delaney told about the vintage tapes you found from the Coventry in 1973, will these shows ever be released?

Bill: Yeah I found them a copple of years ago and I thought that they were some kind of rehearsels and because of the old age of these tapes I didn’t know how the quality was. I put them away for some time, but when I watch them I saw that these are the 2 shows from december 22 & 23rd, from 1973 Coventry. And the quality was very good…So I let Paul & Gene watch this and they were amazed about it…So we decided to put it out on DVD and they will come out later this year…as a boxset.

Carol: A boxset, so can you tell me what’s in it?

Bill: The 2 shows from the Coventry and some extra audio CD or CDs…I’ve some great tapes with the try-out thing for the recordlabels and more…You hear all kind of things on that tape…Maybe added with a photobook.

Carol: And Gene & Paul approaved it?

Bill: Yes they’re approaved it…will come out later this year, will be a great boxset.

Carol: There are also some rumours about that Eric Carr was fired during his illness by Gene & Paul, is this true?

Bill: Eric was a very sweet person, and we still had a good contact…What happened is that Gene & Paul let Eric go, so that he could get better and had time to rest…When Eric was in the hospital we had contact and he told me about this…Eric was very upset about it and was trying to get beath this thing…The only thing he wanted was to come back…Sadly he died…

Carol: Why did you stop as a manager for KISS?

Bill: There were to many changes, first Peter left the band in 1980…Then Ace left…So a lot of things happened…Gene & Paul were talking to taking of the make-up too…

Carol: So if they stayed with the make-up, you would be still their manager?

Carol: What do you think about KISS today?

Bill: Eric & Tommy are wonderfull people…Gene & Paul doing their thing and they do it for more than 30 years…

Bill: I always said that they had should wait and not so quickly after the reunion released a new album (Psycho Circus) I had waited a copple of years…If the time was right…But there was pressure to release something new…And touring? I know that there were serious plans to tour Europe this summer, but why the don’t…I only can guess…

Bill: I see Gene & Paul on a regulair bases…Ace I see sometimes, he’s forming a band now and planning to go into the studio to record a album…Peter is very privately.

Carol: If Gene & Paul asked you back as their manager, would you do it?

Bill: Oh Doc is a great manager…he does everything for the band…so don’t worry about this…But who knows, maybe?

Carol: I would like to thank you for this interview and all those years you put everything into KISS.

Bill: Thanks, you’re welcome…it was my pleasure to talk to you.

After the interview Bill signed some items for me and made some time for taking pictures. 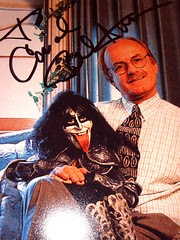 Bill is a great person and easy to talk with, he’s funny and down to earth. When he ever does write a book, there will be a lot of great stories in it…no doubt about it.

BTW my interview is also published in the third issue of Paul Stanley’s Paradise Magazine! 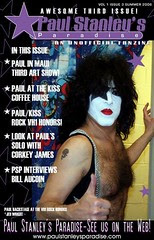 George Xirocostas
Site Administrator
KISS ARMY AUSTRALIA
Reply ron says:
9 September 2007 at 18:50 Great interview!!!
Reply BLANC Philippe says:
17 January 2008 at 20:25 Hi Carol .
I’m Philippe from FRANCE.
I’ve been a fan FOR 30 YEARS. I saw KISS (original line-up) 6 times, and I thought I had a rather big collection …
but, when I saw your blog, I felt very … little !
let me tell you!!! your place looks like paradize to me .
All my greetings go to you . I would like to meet you one of these days, for you to explain me where to get the Paul STANLEY self portrait, for instance …
You kicked my ass, and I sent you all the greetings you deserve .
KISS RULES, CAROL ROCKS .
You’re just a champion ))
Friendly,
Phil
Reply Rockhead says:
19 January 2008 at 12:35 @ Phil; Thanks for your kind words about my KISS site & collection!!!

About my Paul Stanley Self-Portrait, please see my topic about it my site, you can there read my complete story about where I bought it…