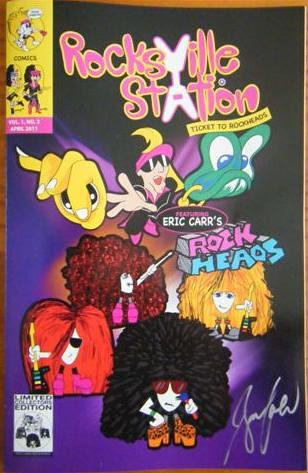 I got the Limited Edition Rockhead's Comic Package in.
This comic is signed by Bruce Kulick and includes a limited edtion poster of the Rockhead's. Also included is a special Card with a piece of Eric Carr's Crazy Nights Drumskin and a Guitar Pick! 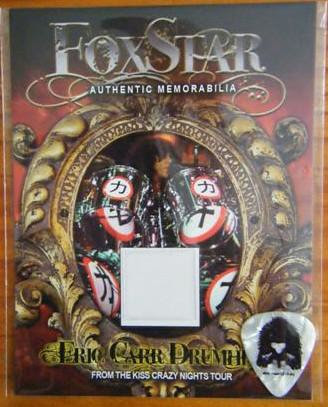 Each card is numbered and signed by Loretta Caravello!
This package is a very cool collectable…


I had the oppertunity to do a Exclusive interview with Loretta Caravello (Eric Carr's sister)!!! With the upcoming release of the Eric Carr's Rockhead's Comic Book!, she was kind enough to answer my questions about the comic book and more…

RH: Loretta, thank you for doing this interview for Rockhead's KISS Weblog.
LC: Thank you also, nice speaking to you also.
RH: Finally, after 15 years we can see the daylight of Eric Carr Rockhead's as a comic book. Can you tell me how it all happened?
LC: Well the Rockheads go back over 15 years, Eric created all the story lines and most of the Rockhead characters, while in KISS. He had a lot of prospects with different companies.
Gene was working with him to try and broker deals with some big names, ie Hanna Babara-( Flintstones, Jetsons, and also Land Mark Ent. But, those most companies usually want alot of control, and Eric at that time was a little uptight to give everything he worked hard for all those years away, he wanted some artistic control.
As the years went by after Eric passed, there were a few small projects, which I put together, but nothing big. I tried, but never really had the know how, to get it really going.
The biggest project involving the Rockheads was when Bruce took the music Eric wrote for a possible Rockheads series and put it in cd form… Rockology.
Early this year Richard Fabio ( Dyna Meecho Llc) came to me through a friend. He loved the concept and being a cartoon man himself, with a comic called Rockville station, he thought it would be nice to work with the Rockheads and bring them more into the public-eye. He is doing a great job, more projects are just around the corner.
I would love if your fans would e-mail us at ripley211@verizon.net or visit Eric Carr.com and let me know what other cool Rockheads things they would like to see in the future.
RH: What are your thoughts about that your brothers project finally will be released?
LC: There is much more to go, but now we have something to build on.
RH: Can you tell me more about how Eric worked on the creations of the Rockhead?
LC: The Rockheads are many different fun little cartoon people. There are girls, fans, managers and more then just the 4 see mainly see ( Scruffy, Slider, Clive and Punky) Each Rockheads has its own special personality. They are cute, fun and you can really find yourself in each and everyone of them.
RH: Is the story in the comic based on stories that Eric had finished or are they complete new?
LC: No Richard, created the story. But future comics will be taken from Eric's own writings and Richard will build upon that.
RH: Did you've seen the comic book as a final product?
LC: Yes it is to good to be true. 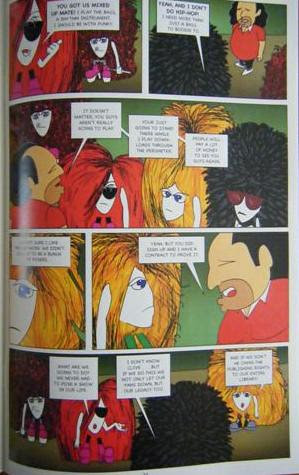 RH: Will there be more issue's of the Rockhead's Comic?
LC: Yes we are working on that now.
RH: I know that Bruce Kulick also is involved with the comic, can you tell me more about it?
LC: Bruce is a dear friend, he owns part of the Rockheads, along with Adam Mitchell. They wrote music with Eric for the series. Bruce is also signing each comic from the Limited Package, and Adam, is coming up with some amazing new music.
RH: Who did come up with the idea to also release it as a limited edition and included a part of the original Crazy Nights bass drumskin?
LC: Richard Fabio ( Dyna Meecho Llc) came up with the idea of the comic and poster. For the first limited edition we wanted to do something, really special.
My dad came across a Bass drum skin which was from Eric's silver. So I thought, lets have the fans own something of Eric's. I always liked that collectable card concept, so that is the way we went. On the back of the card, I sign and number each. These are limited to 400 pieces of 1×1 inch, they are very cool.
RH: I know that Eric would love to see his project to be released as a cartoon show on TV. Will this happen?
LC: That we would love to see, but it is hard, you need someone who really believes in the project to invest a lot, but we will never give up, it could happen.
RH: Last year you told me that there's properly some "new music" from Eric Carr been released on CD. Can you tell me more about it, is there a album coming out?
LC: When I get closer to it, but just to give you an idea, the cd consist of music Eric wrote but was unfinished, so what we did was take his files, and other musicians, ie Bruce Kulick, Ted Poley ( Danger Danger) Marcello III from the band Europe , Benny Doro, Joey from Z02 , AJ Pero (Twisted Sister). complete these songs the great part is how they co-mingle with Eric. It will be out for sure this year.
RH: What will be on it?
LC: Lots of cool stuff. LOL Ted Poley does a great rendition of "Just Cant Wait" we took Eric's music files and Ted sang with that, it is like Eric is in the studio with Ted.
The Beatles did something like that, with a John Lennon track, that found years later.
There is also a song Eric was working on when he passed, He wrote the Lyrics, well some great folks came together and wrote some awesome music and it is now complete, AJ Pero ( twisted Sister) drums on the song, John Santos will sign vocals, Marcela lll from Europe does amazing guitar work. So it is that sort of idea in mind. You guys will love it.
RH: When will it come out and where'll it be available?
LC: It will be out this year, will be available through i-tunes, ericcarr.com, amazon, MVD, lot s of places. The first 500 released will have a nice surprise inside.
We will take pre orders on the 1st 500 a month before release.
RH: I think Eric's Rockology CD was great, as was the Tale Of The Fox DVD! Will there be another DVD?
LC: Sorry no on the DVD.
RH: I loved the Eric Carr Pins and Bobble Heads that have been released. Will there be more merchandise coming out from Eric or the Rockhead's?
LC: New 4 color Eric sticks., bobbles, Rockheads sticks, a few new pins, new set of cards, with Eric's personal shots, IPOD covers, computer covers, calendars and a lot more.
RH: I've read the Eric Carr Story Book by Greg Prato, how did you get involved?
LC: He asked if I wanted to do an interview. So I did and had him ad a few little things, like my moms, poem and a forward by Eric's niece Sara (the little red head in Tale of the Fox)
That is the only involvement I had with Greg.
RH: I think Eric was the best drummer KISS ever had, I loved how he played the drums. Can you tell me more about the first time you saw your brother in action with KISS?
LC: Oooooooooooooooo my well I still can remember the roar for the crowd changing from Peter to Eric Eric, That was my brother up there. A few months before he was sitting in the house, watching TV eating his favorite Gino's ices, not knowing what we be just a few months into the future. Life is very unpredictable.
RH: I'm still a big Eric Carr fan and that's why my nickname is Rockhead. How do you feel with the fact that the fans keeping Eric's memory alive?
LC: Well first I love your name and was not sure in the beginning if you took it from Eric's Rockheads, Eric would be as thrilled as we are, you have actually keep the name out there!
The fans, are amazing, without them there would be nothing.
RH: Finally, could you please leave a message for the visitors of my Weblog?
LC: Hi KISS fans, what can I say other then Carol has always, always been a great fan of Eric's and we are grateful. He also has a lot of awesome things on his site to see, what a nice collection. Keep visiting his site, like we do, you'll never be disappointed! Soon we will interview Carol, on Eric carr.com, so all you fans can really get to know him.
RH: Loretta, I'm looking forward to the Rockhead's Comic. Once again, thank you for your time…
LC: Thank you Carol, your the best!!!

﻿*(c) 2011. All personal interviews/stories may only be used by others if is reference/linked to this site or me and ask me first!