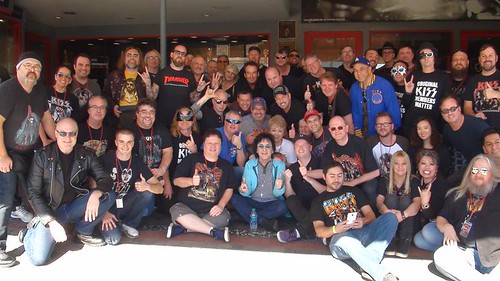 When we decided to do the Platinum VIP Meet & Greet with Peter Criss in Los Angeles, we also went for the LA KISS Landmark Tour with Peter on sunday januari 29th.
We arrived around 10 AM at the Raleigh Studio's and were really excited about the tour, we didn't know what to expect.
We got a good seat in the bus, 4th row and all we had to do now is wait till the Catman arrives!
Around 11:45 Peter and Gigi arrived and took their seats in the bus.
Peter was sitting at right front side of the bus. We left the Raliegh Studio's pretty much right on time and were headed to our first stop.

Our first stop was the former site of the Aquarius Theatre where KISS filmed In Concert for ABC, Peter said that it was such an exciting time for him all of them.

The second stop was the Sunset Sound studio's were Peter did recording some tracks for his solo album from 1978. Peter said that his album was the best of the 4 solo albums. He really enjoyed recording his album then.

Stop #3 was the Guitar Center/Rockwalk shop, were the famous KISS handprints are located, aswell the ones from Peter & Ace Frehley! We all left the bus, including Peter, to see those handprints. Suddenly Peter got on his knees to see if his hands still matched the hands in the ground. 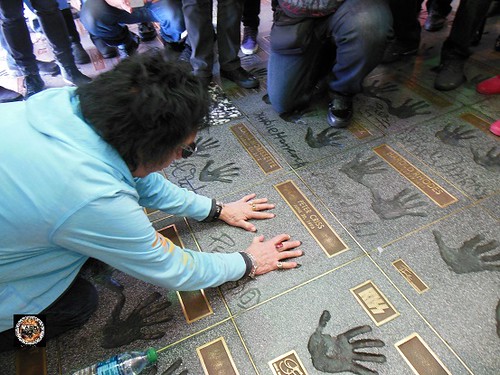 Such a great moment after all those years for him. Fans cheering to Peter and for us it was amazing to be there! 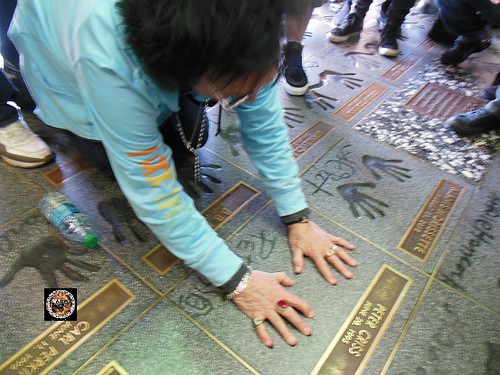 Next we did on that same spot a group photo and that one turned out great!

Then we all got inside to the spot were several KISS items are displayed. Peter couldn't believe it all was there, like his first snare drum & boots! Here's our video...

This stop was one of the highlights!

Our fourth stop was Casablanca Records, were KISS did their first audition in LA and were Neil Bogart signed them to Casablanca!

Stop #5 was the Riot House (Continental Hyatt House) this was the place were he and Ace would both drop TV's out off their hotelrooms at the same time and see who's would land first. Ace painted the walls of the rooms with mustard & ketchup!

Stop #6 was the Tower Records location, famous in KISStory because of picture of he and Paul under the Tower Records sign! Also Neil Bogart paid to have Kiss' billboard in the film Annie Hall. On this exact location we did our second group photo, Peter got up on the platform under the sign just like he did in the past and our photo was shoot and turned out great again! Our second highlight of this tour! 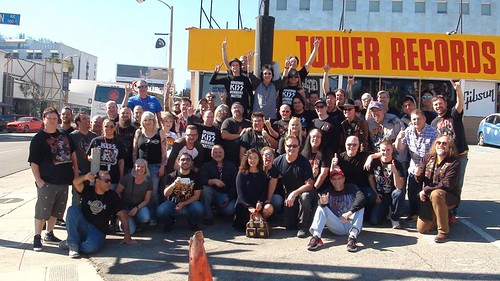 Our 7th stop was the Wiskey A Go Go/The Roxy & the Rainbow Bar & Grill locations, Peter said that back in the day @ the rainbow they had a special room upstairs. You only got up there if you made it and he knew he made it when he finally got in that room!

We had to drive for a little to our next stop and in the meantime Peter told some cool stories like the 3 sold out shows @ the Forum. When we arrived at our 8th stop Century Plaza Hotel it was under construction. So not much to see here but Peter told us that at the showcase for casablanca they shouldn't play as loud as usual, but you can imagine we played louder than usual. On our trip to the next location Peter told some cool stories like about MTV Unplugged, he said on the day of the shoot the crowd went nuts when he & Ace came on stage and he knew for sure it would lead to a reunion very soon. He told us, when the reunion was announced, that he jumped in his bed from excitement when Gene Simmons called him to let him know that the Tiger Stadium show was sold out in 20 minutes!

Next up was stop #9 the A&M Studio's, this is the studio where the original 4 members of KISS recorded their last song together for the last time! That song was Detroit Rock City with the ending of Black Diamond as is seen in the film Detroit Rock City!

Stop #10 was another highlight in our LA KISS Landmark Tour, the KISS Hollywood Star. We all got out and got around the KISS Star and Peter was so proud to have a star on Hollywood Boulevard. On this spot we also got our third group photo! 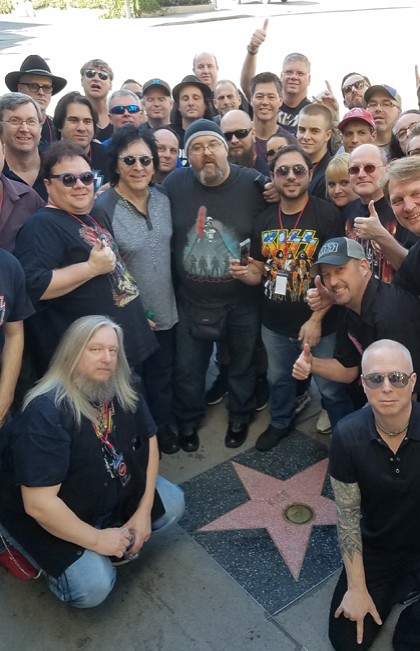 When we went back to the bus Peter joked about the next stop should be at Gene's house and have us all up for coffee, He said it would be even funnier doing it to Paul Stanley, lol.

Stop #11, our last location, the Gruman's Chinese Theatre, were the premiere of the film Detroit Rock City was. When KISS was looking for a location Peter suggested this theatre. Also it's famous for the photo shoot back in the days.

On our way back to the Raleigh Studion's Peter still told us awesome stories, one of them was about his #3. He said it's always appears in his life and that it was his number. We loved listening to his stories and for us he could go on and on and never stop.

When we arrived at the studio's all fans started singing Beth with Peter and that gave us goosebumps! When we came out of the bus, we gave a big hug to Peter and thanked him and Gigi for this experience. Peter than decided to give everyone who left the bus a hug. You can imagine that it took quite some time to hug every fan. After that we talked a little bit more with Peter, we chatted about the track Wishper, a possible new album and about The Netherlands. It was time for us to finally say goodbye to Peter and one more time we gave him a big long hug and he said we were so sweet to both of us, before he stepped in to the car and waved to us when he droved by.

What can we say about this tour with Peter? It was incredible, amazing, so unique. A one kind experience that we'll never forget. Peter was thankfull and so gratefull to us. Also a big thank you to his wife Gigi, she was the one behind this tour! Both they made our Meet & Greet and LA KISS Landmark Tour unforgettable!
Here's a selection of our photo's, enjoy...


*(c) 2017. All personal photo’s/slideshows/filmed footage may only be used by others if is reference/linked to this site or me and ask me first!

awesome story, love it, seems you both had a awesome time there!

Thanks for the detailed report on the stops, I loved reading it! Wished I was on this tour too!

Wow, awesome pics! That must've been a thrill!

Incredible story, wished I was there too.

I'll never forgive myself not going to this event, thanks for your story!

Thanks for sharing, great story !!!

Cool, that had to be lots of fun with him!

Seems like this was a incredible, one kind of cool trip! If he do it again I know I've to be a part of it for sure!

This was one hell of a trip with Peter Criss! So cool that he was your guide!