The KISS Kruise VI - Creatures Of The Deep!!! 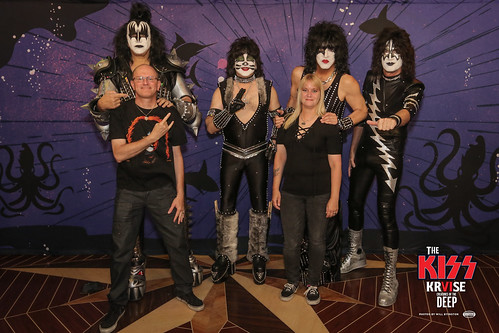 We arrived in Miami on november 3th at 3 PM, got a cab to our hotel, but before we could checked in, we were welcomed by friends in the lobby and even later in the elevator and hallway, lol.
After dinner we went to the Hard Rock Cafe were we had a great time seeing the Big Rock Show live.
The next day it was time were we came for: the KISS Kruise VI. As soon as we got on board of the Pearl we went straight to the penny machine to get our KISS Pennies. Such fun to pull the wheel to get them out.
We went outside the Atrium and a few minutes later we shook hands with Paul Stanley, Gene Simmons, Sophie, Nick, Shannon, Eric Singer, Tommy Thayer and Doc McGee, who just came on board, how cool is this!
After the safety drill we went to the pool deck to get a good spot for the KISS sail away show. We dedided to go upstairs to got a good look over the stage. First up there was the welcome shot hosted by our captains KISS! Followed by a group photo.
The sail away show would start at 9 PM, so I decided to go to the merchandise store. Got some T-Shirts, Hoodie, Bandana, Tommy Thayer's signed mini Guitar & more.
I also visit the Gene Simmons Axe Petting Zoo and also we managed to get the first KISS Cup: the Eric Singer one!
So now it was almost 8 PM, only 1 hour to go.

9 PM it was time for the KISS sail away show and the band startet with I Stole Your Love and played some more great tracks as Watchin' You, Take Me & A World Without Heroes.
Here's our video of Watchin' You:

The band sounded great and we had such a great time to see them again.
Here's our video of A World Without Heroes:

We had a blast at this show, it all ended to soon, wished they played all night.
This was the setlist: I Stole Your Love, Plaster Caster, Take Me, Nothin' To Lose, Hide Your Heart, Watchin' You, Hotter Than Hell, Firehouse, A World Without Heroes, Shock Me, Got To Choose, Christine Sixteen, C'mon And Love Me, Mainline, All The Way, Goin' Blind, Love Her All I Can & Shout It Out Loud.

After the show it was time for dinner and than we went to Paul Stanley's Weapons Of Choice event, finally we could hold Paul's purple Ibanze guitar and also the mirror one! So cool!

On Saturday we had a full program, after getting the KISS Cup, the Paul Stanley one, we went to the pooldeck for playing air guitar with The Dives, followed by got talent, hosted by Eric Singer. Sometimes Eric had a look on his face like what I'm doing here, so funny. Then it was time for name that tune, with Tommy Thayer. It was great to hear Tommy only play solo's and I even won a guitarpick set with a trivia question.
Later it was time for the Dead Daisies and they rocked the pooldeck. After their show they did a meet & greet. So cool to meet them again!
Time to relax a bit and got some food. Later that night we went to see Sophie Simmons, she did a cool performance. After this we watch The Dives and went to the casino, were we meet Tommy Thayer: 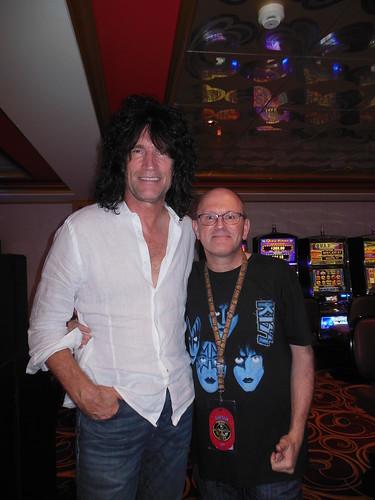 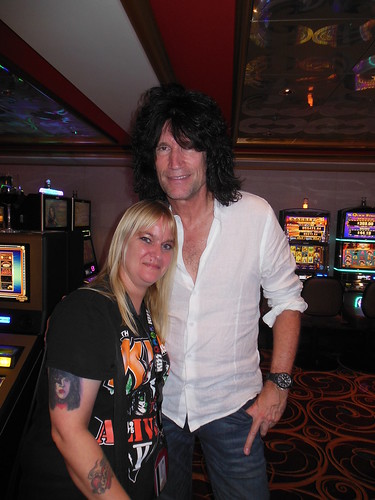 A great way to finish this day.

On sunday we had a relax day with the first stop in Cozumel, Mexico. After our visit we checked out Paul Stanley's piantings in the libary. It's awesome to see finally some original work from him. I bought a Paul Stanley Self-Portrait years ago and alsways wanted to see more of his paintings. We enjoyed it.
At 4 PM we had our photo booth, this time they had a KISS gear box, gold & platinum records, guitars and more. 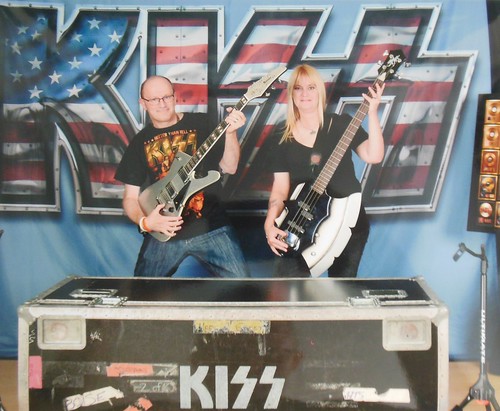 Also we managed to get our third KISS Cup, the Tommy Thayer one.
Today we had our indoor show and around 8:30 we went to the Stardust and we got a great spot. So now it was time to wait untill show begins. Would they've the tank? Which customes? What songs will they play?
At 9 pm the waiting was over, the curtains went open and we saw The Tank! Yes, what a cool stage! A few moments later Gene, Paul, Tommy & Eric came on stage... in their Creatures Of The Night outfits! Yes, this must be a cool show to be happen!
They started with Creatures Of The Night, here's our video:

Followed by Keep Me Comin' and the place went nuts! KISS had really pleasure on the stage and with the good responce of the fans to these songs. They also played (it's unbelieveble) Radio Active & Wouldn't You Like To Know Me.
Here are our video's:

We could never have imagine that we ever hear those songs from Gene & Paul solo albums from 1978. Another rare song was Rock And Roll Hell, we had a blast. It seems we went back in time to 1982. What a show!
This was the setlist: Creatures Of The Night, Keep Me Comin', Detroit Rock City, Radio Active, Calling Dr. Love, Wouldn't You Like To Know Me, I Love It Loud, Firehouse, Rock And Roll Hell, Cold Gin, Hotter Than Hell, War Machine, Love Gun, God Of Thunder, Shout It Out Loud, Black Diamond. Encores: Strutter & Rock And Roll All Nite.


After the show we went to the restaurant and later we checked out the band Teaze.

On monday we had our second stop in Grand Cayman or as KISS called it Grand Catman. On the tender and on shore we meet some of the members of the Dead Daisies. Grand Cayman is a nice place and we had a great time.
Once on board we bought our KISS Cup and this time it was a special glow in the dark cup because of tonights theme night. Also I give the new KISS Game a try, it's for your mobile and will come out in the spring next year. Funny game.

When heading to the elevator I've meet Sophie Simmons, she was so friendly to me. 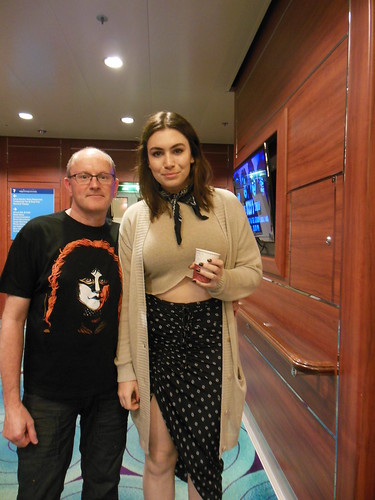 After dinner it was time to get ready for our photo shoot with KISS. Nervous as always we got up to the Spinnaker lounge and when our moment was there, we were so excited! I had a special moment with Paul, I'll never forget! And as you all can see our photo with the band turned out awesome!

Later we went to see The Dives (with Evan Stanley, son of Paul) and they are great! Even Paul, Eric & Tommy came down to see them play. We had the chance to meet Paul for a moment!
Here's our video:

Up next were the Dead Daisies and they rocked the Atrium again, especially with Brian's 100.000 Years drumsolo. My lovely wife Marina got to hold Marco's bassguitar at the end of the show! A great finish of this day.

On tuesday we had a full program, after we bought our last KISS Cup of this Kruise, the Gene Simmons one, we started with Paul Stanley's pizza contest in the stardust, like last year Paul demostrated his pizza making skills and he joked a lot. Great to see it.
Followed by who's smarter than a rock god? with Gene Simmons. Always funny to see when Gene gives a answer it's always a long answer. Of course Gene won the event.
Right after this we went to see Nick Simmons & Friends, he did a cool performance with Evan Stanley as special guest.
Later we went to the Q&A with KISS, there they announced KISS Kruise VII, november 5th-10th 2017 sailing from New Orleans. Also they spoke about a possibility to record a new album next year. As always they joke a lot at eachother, especailly Gene is the one who they all pick on, lol.


It was time to grab something to eat before we went to the show of The Dives, great performance and we did meet the band after the show. 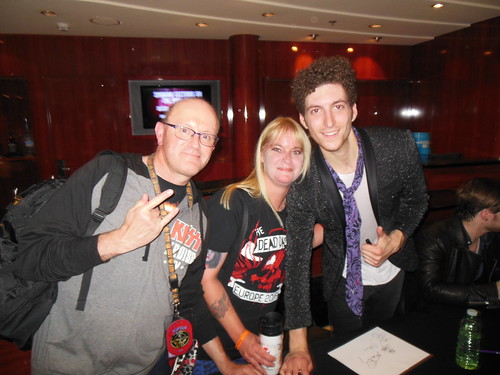 We think it was cool to see the children of Gene & Paul playing on this Kruise, was quite suprising what they had in store for us.


Then the Dead Daisies closed of the KISS Kruise VI with a great show in a packed Atrium.
Wednesday, our last morning on the Norwegain Pearl. After breakfast it was time to embark the ship, but not before said goodbye to a lot of friends. During the Kruise I always got compliments about my KISS blog and that's always great to hear and that get's me inspired to do it!


We had such a awsome time again and this was our 5th KISS Kruise and every Kruise we did was special, we have no favorite, all 5 kicked ass! We hope we're sailing with KISS again on the KISS Kruise VI nex year...

*(c) 2016. All personal photo’s/slideshows/filmed footage may only be used by others if is reference/linked to this site or me and ask me first!

We hope there will still be some cheaper cabins when we have to book.

Booked today, but no cheap cabin for us, doesn't matter we!ll have a great time. See you there.

We'll see you there!

Would be great if we got some news about line-up, don't you think?

Wow, I love the KKVI design, looks awesome on the shirts, cups or towel, love it!

It's time we get some announcements!!!

Great that the Dead Daisies are back and curious about Evan and Sophie gigs. Ans what about the Paul activity, pizza , YES!

Yep, we're also excited that The Dead Daisies, Sophie Simmons and Evan Stanley are on this years KISS Kruise!

Yes Rockhead, me too!

Gene Axe petting zoo is back, love this, will check it out for sure.

Less than 100 days to go for the best KISS party on the planet!!!

Bring on november! I cann't wait to be sailing with Kiss and also the Dead Daisies, this kruise will rock!

I had hoped for some BIG name added to the line up for this years kruise, all small bands.

It's coming closer, I cann't wait to be in Miami, whooooo.

We got ours too!

I'll getting these souvernir coins for sure!

Yep, will be checking Paul's guitar zoo out, finally to get the chance to hold one of more of these babies.

Counting the days, soon we're in Miami and ready to rock the boat with Kiss, hell yeah!!!

Great report! Your pic with KISS is awesome, love it!

Seems you had a great time with Kiss, wished I could do the kruise one day.

Loved your review, photo with the band is awesome and you've meet sophie and evan, so cool!

As always great report on your Kiss kruise!

it was a pleasure to read your Kiss kruise report. Enjoyed the photo's and video's too.